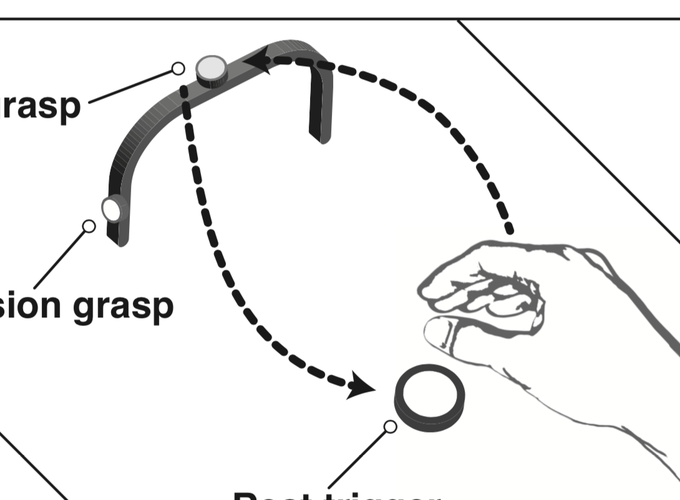 Hand grasping is a sophisticated motor task that has received much attention by the neuroscientific community, which demonstrated how grasping activates a network involving parietal, pre-motor and motor cortices using fMRI, ECoG, LFPs and spiking activity. Yet, there is a need for a more precise spatio-temporal analysis as it is still unclear how these brain activations over large cortical areas evolve at the sub-second level. In this study, we recorded ten human participants (1 female) performing visually-guided, self-paced reaching and grasping with precision or power grips. Following the results, we demonstrate the existence of neural correlates of grasping from broadband EEG in self-paced conditions and show how neural correlates of precision and power grasps differentially evolve as grasps unfold. 100 ms before the grasp is secured, bilateral parietal regions showed increasingly differential patterns. Afterwards, sustained differences between both grasps occurred over the bilateral motor and parietal regions, and medial pre-frontal cortex. Furthermore, these differences were sufficiently discriminable to allow single-trial decoding with 70% decoding performance. Functional connectivity revealed differences at the network level between grasps in fronto-parietal networks, in terms of upper-alpha cortical oscillatory power with a strong involvement of ipsilateral hemisphere. Our results supported the existence of fronto-parietal recurrent feedback loops, with stronger interactions for precision grips due to the finer motor control required for this grasping type.