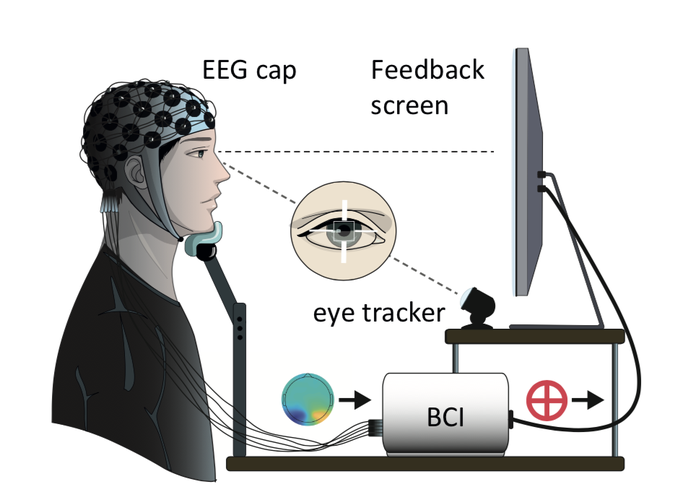 Visual attention can be spatially oriented, even in the absence of saccadic eye-movements, to facilitate the processing of incoming visual information. One behavioral proxy for this so-called covert visuospatial attention (CVSA) is the validity effect (VE): the reduction in reaction time (RT) to visual stimuli at attended locations and the increase in RT to stimuli at unattended locations. At the electrophysiological level, one correlate of CVSA is the lateralization in the occipital alpha-band oscillations, resulting from alpha-power increases ipsilateral and decreases contralateral to the attended hemifield. While this alpha-band lateralization has been considerably studied using electroencephalography (EEG) or magnetoencephalography (MEG), little is known about whether it can be trained to improve CVSA behaviorally. In this cross-over sham-controlled study we used continuous real-time feedback of the occipital alpha-lateralization to modulate behavioral and electrophysiological markers of covert attention. Fourteen subjects performed a cued CVSA task, involving fast responses to covertly attended stimuli. During real-time feedback runs, trials extended in time if subjects reached states of high alpha-lateralization. Crucially, the ongoing alpha-lateralization was fed back to the subject by changing the color of the attended stimulus. We hypothesized that this ability to self-monitor lapses in CVSA and thus being able to refocus attention accordingly would lead to improved CVSA performance during subsequent testing. We probed the effect of the intervention by evaluating the pre-post changes in the VE and the alpha-lateralization. Behaviorally, results showed a significant interaction between feedback (experimental–sham) and time (pre-post) for the validity effect, with an increase in performance only for the experimental condition. We did not find corresponding pre-post changes in the alpha-lateralization. Our findings suggest that EEG-based real-time feedback is a promising tool to enhance the level of covert visuospatial attention, especially with respect to behavioral changes. This opens up the exploration of applications of the proposed training method for the cognitive rehabilitation of attentional disorders.